Multiple Sclerosis?  Is that contagious?

We all know about diabetes, heart disease and cancer.  Well, as much as any of us can learn from watching the news whether on TV or on the Web.  On average, the advice is loud and clear.  You’re told to: eat healthily, exercise moderately.  Additionally, don’t smoke, don’t take drugs and go easy on your alcohol consumption.  Overall, it makes good sense.  Your heart, your lungs and your liver play a major role in keeping you alive and well.  That little, everybody realises.  But how much do we really know when it comes to illnesses of the nervous system?  And without a healthy nervous system, well…  This article deals with Multiple Sclerosis.  It is an attempt to fill a gap in my own general ignorance and to inform others about this cruel condition…

Until recently, multiple sclerosis (MS) has been to me one of those mystery diseases.  Rare enough to know that the chances of being affected by it were always fairly slim.  Mysterious and incurable enough that I ought to be respectfully defiant of it.

French neurologist Jean-Martin Charcot (1825-1893) was the first to provide a complete description of the aetiology of the disease in 1868.  Summarising previous reports and adding his own clinical and pathological observations, Charcot called the disease, sclérose en plaques.

A Disease of the Young

The three signs of Multiple Sclerosis, now known as Charcot’s neurologic triad, are nystagmus, intention tremor, and telegraphic or staccato speech, although these are not symptoms unique to MS. Charcot also observed cognition changes, describing his patients as having a “marked enfeeblement of the memory” and “conceptions that formed slowly”.

Charcot called the disease: “the polymorph affection by excellence”.  And MS is exactly that.

The disease is a long-term chronic illness.  A pernicious ‘invisible’ neurological disorder that can affect younger adults, sometimes as early as their late teens, but with a usual onset in the range of those aged between 30 and 50 years old.

Multiple Sclerosis is a disease whereby the immune system seemingly attacks the central nervous system – to you and me, that means the brain, the spinal cord and the optic nerves.

The symptoms of multiple sclerosis are different for each sufferer, and they do vary in severity.  They range from shooting pains, numbness in the limbs, extreme fatigue, optic neuritis, skin tingling and other abnormal sensations, progressive paralysis… or even loss of vision.

Some regions are fairly uncharted and these colours are only intended to provide an impression of the geographical trends.

Major routes of migration from the high-risk zone of northern Europe, especially including small but informative studies, are shown as dotted arrows.  Studies involving migrants from low-risk to high-risk zones are shown as solid arrows.  Findings have suggested that MS sufferers who migrated outside their region of origin acquire the same risk of developing multiple sclerosis as that of their adopted region.

Multiple sclerosis is most common in North America and Europe, at 140 and 108 cases per 100,000 individuals respectively, while in sub-Saharan Africa the rate is just 2.1 per 100,000, the Multiple Sclerosis International Federation’s Atlas of 2013 showed last year.

The atlas also confirmed that MS occurs significantly more in countries at high latitudes, with Sweden having the highest rate in Europe and Argentina having more cases than countries further north in Latin America.

The reason for the link to high latitudes is unclear but some scientists have suggested that exposure to sunlight may reduce the incidence of the disease.

The Physics of the Human Central Nervous System

The central nervous system (CNS) includes the spinal cord and the brain.  Perception, movement control, learning, memory and other higher neural functions are carried out in the brain. 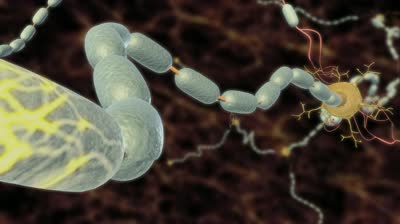 Information about the environment is acquired through several types of specialised sensory cells that each respond to a particular external stimulus.

Nerve signals are conducted by an axon with a myelin sheath wrapped around it.

Overall, the signal has to be transmitted to and from the brain and spine.  In multiple sclerosis, this is precisely where things begin to go awry.

Neurons convey information by means of short pulses of electricity that circulate along the length of an axon.  These signal transmissions are disrupted in MS.

The electrical signal in axons is a brief voltage change called an action potential, or nerve impulse, which can travel long distances, sometimes at very high speeds, without changing size or shape.

Action potentials are generated by the transitory rapid flow of sodium and potassium ions across the neuron cell membrane causing localised changes in voltage across the membrane.  When an action potential arrives at the ends of the axon, it interacts with thousands of neighbouring cells across synapses.  The electrochemical interactions at these synapses modify the intensity of the signals as they pass from cell to cell.

There is no single test that confirms the diagnosis of multiple sclerosis, and there are a number of other diseases with similar symptoms.  So how do you diagnose Multiple Sclerosis?

While one person’s diagnosis may be immediately suggested by her symptoms and history, another’s may not be confirmed without multiple tests and prolonged observation.

The distribution of symptoms is important because MS affects multiple areas of the body over time.

The pattern of symptoms is also critical, especially evidence of the relapsing-remitting pattern, so a detailed medical history is one of the most important parts of the diagnostic process.

A thorough search to exclude other causes of a patient’s symptoms is especially important if the following features are present:

In addition to the medical history and a standard neurological exam, several lab tests are used to help confirm or rule out a diagnosis of MS:

The clinician making the diagnosis, usually a neurologist, may classify the disease as “definite MS,” meaning the symptoms and test results all point towards MS as the cause.  “Probable MS” and “possible MS” reflect less certainty and may require more time to pass to observe the progression of the disease and the distribution of symptoms.

The Simvastatin Trials – Hoping for the Future…

Simvastatin is a member of the statin class of pharmaceuticals, a synthetic derivative of a fermentation product of Aspergillus terreus – a common fungus.  The drug is marketed generically under the trade name Zocor, used in conjunction with exercise, diet, and weight loss, to control elevated cholesterol.

Several trials of statins in MS have proved negative, or at best equivocal.  Some of these studies have used doses that are of similar potency to the dose used in the Simvastatin trial, i.e. 80mg.  Therefore, the question is to determine whether Simvastatin is working via MS-specific mechanisms, MS non-specific mechanisms but as a neuro-protective agent, or targeting the so-called co-morbidities, such as vascular disease, that may speed up the disease progression.  Research must identify the mechanisms at work before the therapeutic strategy can be taken forward.

80mg per day is a large dose, likely to be associated with side-effects, in particular adverse effects on muscle function (myopathy).  Thus, it is important to determine if lower doses are effective, in order to minimise the side effects.

Additionally, the EMA (European Medicines Agency) and FDA (Food and Drug Administration) tend to require a dose titration as part of any pharmaceutical development programme when they consider drugs for licensing.

With the current level of risk associated with drug development and the amount of regulatory red-tape, it seems unlikely that an alternative, or a competitor, to the current pharmaceutical industry model will emerge.

European countries that I know have warning banners on TV commercials for certain food products or drinks, or provide advice on how to keep a healthy heart and liver and a heath-promoting lifestyle.  However, there is a sort of awareness blackout when it comes to illnesses that concern the nervous system.

So I decided I would do my bit and write this post.  Because the number of people living with multiple sclerosis around the World has increased by 10 percent in the past five years to 2.3 million MS cases, according to the most extensive survey of the disease to-date.  Thousands of young and seemingly fit people are diagnosed with the disease every year.  And the thing is “my friend” has MS…  And to my great shame, it suddenly hit me!  I realised how little, if at anything all, I knew about multiple sclerosis.  And the thing is… well… this time, it’s personal!

So, don’t forget your vitamin C, eat your cereals every morning, stay away from saturated fats…  And don’t forget about topping up your sunlight levels and vitamin D because it might be more important than you realise.  And finally, spare a kind thought and a smile for that wheelchair-bound person you pass by in the street.  Or that seemingly fit young man who walks with a stick.  Maybe even say Hi!  He or she may be one of the few unfortunate young ones who have to cope with the symptoms of MS throughout all their life.  But it’s not contagious, so don’t be a jerk about it!  Because it could be you one day, or someone who is close to you…

NASA Image of the Day